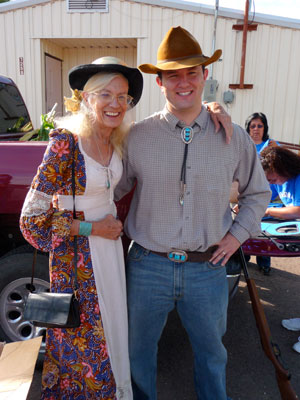 Halona Plaza comprises a restaurant, a convenience store, and a Bed & Breakfast: The Inn at Halona.

The grocery segment of the business has been moved to its own location, Halona Marketplace.

Andrew & Effa Vander Wagen arrived in Gallup in 1896 as missionaries for the Christian Reformed Church of Grand Rapids, Michigan. After establishing missions on the Navajo reservation and in Zuni, the Vander Wagens then purchased the Barth Store in 1910 for 1000 sheep. The Barth family, of St. Johns, Arizona, had owned the store on the south side of the Zuni River (the present site of Halona Plaza) since 1866.

The 1910 store was operated by Andrew (Datchu) and Effa (Tsitda) Vander Wagen, along with their eight children: Edward (Halonaque), Mary (Laydisitu:ts’a), Simon (Hapadina), Margaret (Layshusi:ts’a), Eleanor (Deluwahsi:ts’a), Richard (Hawikuh), Bernard (Itiwanna), and Gertrude (Chimk’yasi:ts’a). It was expanded and run under the name A. Vander Wagen, Dealer in General Merchandise, Cattle, Horses and Sheep.

The Vander Wagen son, Simon, ran the present store from about 1923 to 1927, as Sy Vanderwagen, Trader.

In the 1930s, Bernie (Bernard) and Richard took over the store, expanded it, and ran it under the name Vander Wagen Brothers. Richard then ran the stores at (old) Pinehaven, Whitewater (now known as Vander Wagen), and in 1958 he purchased the C. G. Wallace store and renamed it his Zuni name of Hawikuh.

The present store was run by Bernie under his Zuni name of Itiwanna. In 1961 Bernie sold the store to his nephew, Ernie Vanderwagen (son of Edward), and his wife, Esther. The store ownership was incorporated as Zuni Shopping Center, Inc.

Bernie repurchased the store in 1968 with his daughters, Beverly Vander Wagen Hurlbut and Linda Vander Wagen Ortega, as stockholders. He also purchased the Kelsey Store, renaming it Halona Plaza, after the old village of Halona, as well as his brother, Ed’s Zuni name, Halonaque.

In 1971 Bernie hired Richard Dodson (Son of Gertrude Vander Wagen Dodson) and wife, Charlotte, to manage the store. Richard then moved the grocery store from the Kelsey Store back across the street to the Vander Wagen store, along with the name, Halona Plaza. The Kelsey store then became a furniture store and lapidary supplies run by Jim and Beverly Hurlbut.

In 1974, Roger Thomas and his wife, Elaine, (daughter of Gertrude Vander Wagen Dodson) were hired to co-manage Halona Plaza. In 1982 Roger and Elaine purchased Zuni Shopping Center, Inc. In 2009, their son, Loren (now the CEO), joined them in running the store.